You can check the website, look at lift status, check the webcams and all can look good till you get up to the parking lot and see the lift not spinning or the closed sign up... use of many expletives come at this point typically, but once in awhile it all works in your favor and your in the right place at the right time.  As I came around the corner into the parking lot the truck was buffeted by gusts and visibility was marginal. But... the chair was spinning and the pop fences were going in... things were looking good so far.

Despite heavy wind and snow first chair loaded at exactly 8:30 today and all nine people loaded the slow ride to the top, was it windy? Well, all of us were happy that someone had the balls to yell "Bar Down" when a wind gust grabbed our skis and tried like hell to lever us out of the chair. Arrival and we cackled "Have a good one!" into the wind and dumping snow and took off on our independent missions. I and another gentleman took Bonanza and owned that bitch... you never quite know what your first three turns will be like but as we sunk into 4" of pow or so we were not feeling the bottom and then just let'em run. Consistent and near perfect, we were not holding back too much. As the guy on the left opened the throttle so did I so we were neck and neck hell for leather in fresh pow and low vis just flying down and loaded Chair Two together. "Wow" I said, I had no idea it would be THAT good. "Definitely free refills" he commented and I wondered aloud whether even the trees might be good to go. "Lets go find out" he echoed as we unloaded. Cruising past Bruces into the Zephyr trees my first turn was soft and perfect as was my second and third until my slalom turned into GS and I was flying through the trees and fresh untracked pow like it was feet instead of inches deep. Third run was as good as the second and again, crossed no tracks as us nine skiers were pretty spread out. We had the entire mountain to ourselves as NW never loaded.

As things too good to be true often do... it all came to a blazingly fast halt though when we skied up for the next ride only to be met by a red "Lift Closed" sign. "Noooooooooooooooo" was heard by each of the nine as they skied up.

"What a bummer!" said one of the last guys in as we were clicking out of our bindings... yeah but "hey", I said, "those were the best three runs I've had in months." A couple guys shook their heads affirmatively. Yep, the juice was definitely worth the squeeze on this one. Sometimes the rarity of something makes it even more valuable. Definitely so in this case. Made my 8 hours of office work so much better as part of my mind just kept reliving those three runs over and over... 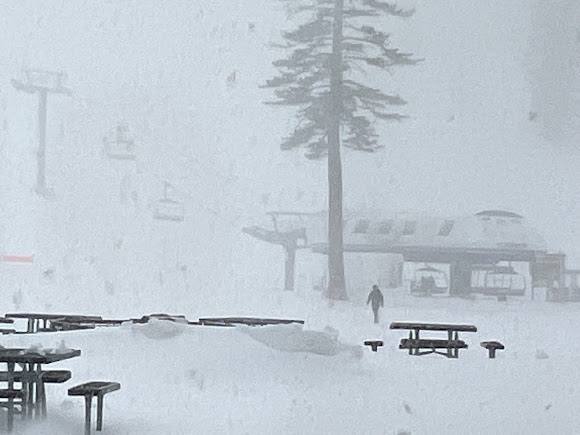