The Heat be Comin Mon

Daniel Swain of Weatherwest.com just came out with his mid-Feb prognostication and it ain't looking grand folks... not only are there no storms in the forecast as the East Pacific Ridge hovers off our coast pushing all storms North, it also calls for temps 8 to 12 degrees above average.

I realize that we all want some snow for fun and to renew all the off-piste skiing we have been missing but it just doesn't look like thats in the cards according to the forecast.

The beauty of the last month is that it has stayed cold allowing the groomers to really lay down nice deep cord making first tracks wonderful and memorable. That may all change once the oven heats up.

The caveat here, as my friends over at tahoeweatherblog.com would remind me is that it is only a forecast for now and in the final analysis Ma Nature is always in charge... just like the Bombogenisis storm in October or the four day heavenly dump in December, it can all change in an instant... lets hope it does. John Muir said a butterfly could flap its wings in South America and we could get a big storm up here because of it... I say flap Butterfly's! Harder. Harder. 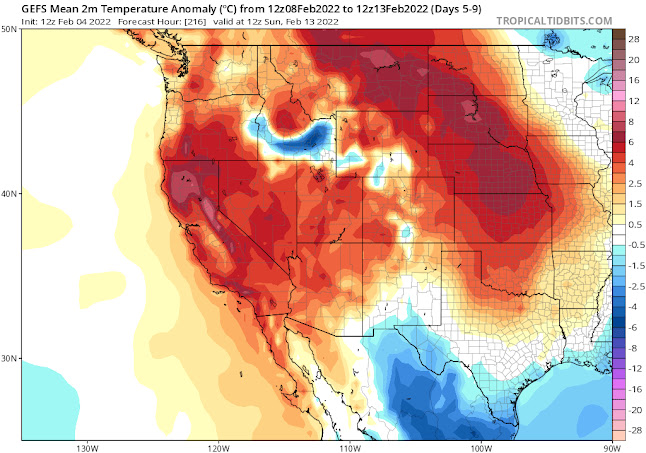