If you have been skiing Rose for long you'll remember the absolute wonder and incredibly unique spot affectionately called "The Bunker".  Unfortunately, (due to the over consumption of alcohol anywhere near the bunker) I don't have any photos but, trust me, it was an outrageous affair. Hanzee, (on the right below) as he is known throughout the Rose Universe would set up a deep pit with a sitting bench of snow running all the way around it with a set of stairs running down into it on top of Lakeview Knob just above and West of the Lakeview unload.

With International flags flying around The Bunker you could sit yourself down and for a small donation and drink yourself silly while telling big lies about the bottomless runs you just enjoyed down Shangri- left or Manzanita Bowl. Sooner or later a hot brat on a bun with liberal amounts of hot mustard and horse radish, onions etc would be dropped into your hands at just the right time while cranking open another beer. Music played on while everyone traded BS and the storm raged up above. Bunker time was amazing time and we all miss the good times we shared in there with the amazing Hanzee. Just ran into him at the German Beer Garden on Sunday and he wishes all his fans well.

Who put the kabosh on The Bunker you ask? Not Mt. Rose as the scuttlebutt goes, no, it was attorneys of course worried about negligence claims tied back into Hans and The Bunker. Not surprising noting the fact that the US houses two thirds of the worlds attorneys within our countries borders... and who makes those laws that absolves individuals from taking personal responsibility for their own stupidity? Our politicians of course.

If anyone has any pics of The Bunker I would love to see them! 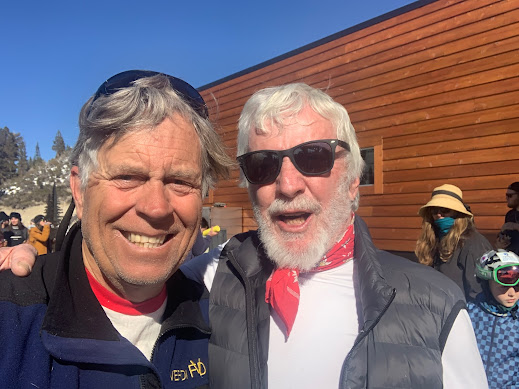