Weather Wisdom According to Sven

A wise friend over at www.tahoeweatherblog.com gave me a good reminder a couple days ago that one thing that can be said about the weather... change is the only constant. Secondly, Ma Nature operates on her own time and forecasting is cloaked more in probabilities rather than certainties. It was a good reminder that merely a little over a month ago we were wondering when it would ever stop snowing... the human mind is quite narrow that way I suppose. However, one thing we can all agree on, it has definitely been a wild ride meteorologically speaking.

Late summer into fall we reveled in warm, windless and beautiful weather. A scant two weeks later we enjoyed the exact opposite with an unprecedented October dump that opened up baseless skiing up high allowing for steep and deep turns over what had been only 36 hours before just bare ground. This was followed by a much drier than average November. The first week of December saw temps so warm one could paddle board or even swim in the lake. This was followed by a record breaking monster snowstorm that shut down Sierra roads as well as many roads and highways in the valley for four days. Over eight and a half feet fell on Mt. Rose and after four days of the white torrent all chairs and runs opened on the mountain and we played hard in all that new snow. By the months end the Central Sierra Snow Lab received an excess of 214" of snow in the month of December setting an all time record. This resulted in excellent skiing... until The Blow. The windstorm blew much of the new snow into sastrugi, hard wind crust or in some location, bare ground on the windward sides. It also closed roads and highways in the mountains and valleys due to blowing and drifting snow and ice. This left the snowpack ragged and torn and resulted in a backcountry that was less than desirable for most of us. Which leads us to today... although there has been some whining about the lack of storms, snow conditions etc. We all just need to look around, feel the lack of wind and the sun on our faces, the wonderful lack of crowds on the weekdays and just enjoy the midwinter quiet.

My advice... enjoy what we have weather wise... it's all we've ever really got anyway so we might as well make the most of it. Morning groomers are excellent as are the kaleidoscope of beer and ciders available at the best outfitted bar in all of skidom in the afternoon. It will blow and snow again, but no one... even if they think they know, really don't know when or how much. 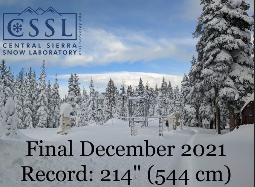