When Rose finally opens... it will primarily be due to the efforts of George Wagner and his snowmaking crew. Recently promoted to King of Snowmaking, Wagner pours over forecasts daily looking for any chance he can get to fire up the guns and start blasting. Unfortunately, with the exception of just a handful of nights, high pressure and temperature inversions have been keeping his hands tied a majority of the time.  Many of you may remember George as a liftee back in '04 when his aka was "Bam Bam." He worked his way up to grooming and has been the heart of the night shift over the last several years doing the heavy duty winch catting operations around the mountain. This year he will have an even bigger role in slope quality control with King of Grooming Dave Hahl's retirement as well as Skojo's departure. Technically, George is competent and highly skilled in his chosen profession, but even more importantly, he still is one of the nicest guys on the mountain... and that combination is sometimes hard to find.

Snowmaking is not an automated operation. These night warriors are constantly taking the quads or sleds up and adjusting pressure, turning the snowmaker for better deposition or wind issues and adjusting the amount the gun sprays out depending on temperature and humidity. And thats when everything is working well, which is not always the case. When something breaks its a wet or frozen mess or sometimes both that they have to deal with. The most difficult call though is whether to bring the crew up at all... will it chill down enough to blow clear stuff or white stuff is the big question. Tonight for example... in the high 30's (AGAIN) so blowing snow is not even a possibility. And most nights have been just like this.

The evening I visited they were on a roll and they had blown 2.6 million gallons in 48 hours. I don't care what resort you are at... thats a lot of snow. The result: coverage is good from the top down KC and to the NW load. Next is working on a trail down the Wiz so that have some beginner options. So, rest assured these guys are doing their best with a very uncooperative Ma Nature at this point. After experiencing how hard these guys work, if Rose isn't open, you should know its not for lack of trying on their part. When you see these guys around in the bar, remember to buy them a drink... they more than deserve it. 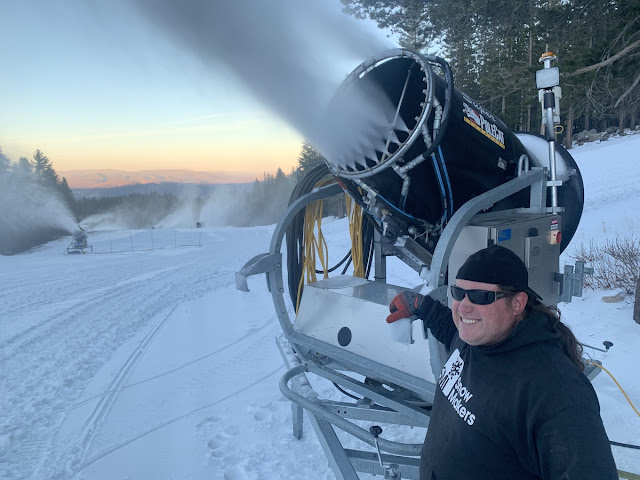 Greetings all,  Well, winds have ravaged the BC pow quite a bit but there are isolated pockets of good snow still waiting out there if you hunt and peck. The actual surface conditions will remain quite good on the groomers in the morning and in the trees through the middle of the week. Get your turns in now tho as Juneuary is about to descend upon us late this week and through the weekend. Expect highs in the 60's in the valleys and 50's up in the hills. This will not be good for an already meager snowpack. With temps too high at night to make snow, you can expect to see skid marks again rear their ugly faces, especially on any slopes getting more direct sun exposure (like Silver Face).  Tahoe is now approaching and will reach less than 50% snowpack average in places this week. Our fall quarter snowfall was weak in Tahoe and much of the West and improvement is not forecast anytime soon. The Palmer Drought Index kind of says it all. Green and blue is good, yellow, red and brown
Read more
March 03, 2022
Read more

The Pow Queen Grants Us The Privilege...

Although the lifts may have stopped spinning it doesn't mean the skiing has stopped... when the Pow Queen graces us it would, for all intents and purposes, be a disservice and disgrace not to yield time to bask in her flowing and sparkling white ropes... Especially on a crystal clear blue bird day in picture perfect snow. Not wanting to piss off the Queen we headed out and up. Most lifts have stopped their spin so now you just have to earn your turns. And as for yesterday... it was well worth it. Excellent skiing in 16" of cold smoke was available yesterday anywhere in the Sierra's above 7500 feet.  Due to the lateness of the season and the sun angle however... shelf life is short so timing was everything. For those of you that made time to make it happen like retired Snow King Dave Hahl... it was well worth it. Sven
Read more