The snowpack half empty or half full: You decide

The latest figures for snowfall puts 200" or half our typically 400" seasonal snowfall at the summit. I am sure on their storm boards this is correct. However, as most skiers know, storm boards don't tell the entire story. They are normally set up in the most protected leeward locations in the trees where lots of snow tends to blow in and lay deep and shaded till spring. That 200" sounds pretty good when you think about it considering how meager meaningful snow has really been.

But hey, take a look around. The fact is we have virtually no low elevation show and the mid altitudes are meager at best. The snowfall on South sides is mostly non-existent as anyone who has been out in Manzanita Bowl lately can tell you They are one sunny week away from being bare boned. Even the snowpack on North aspects is nothing to brag about: The Chutes are a case in point.  Just look at the bottom of your skis and my point will be proven. The fact is we have had a very poor year and the snowpack in anywhere but the snowiest of places is pretty darn thin. This cold March and series of inside sliders have keep at least a few inches coming per storm which has also helped us and has kept us from an early melt out. With High Pressure and Spring headed our way and forecasters touting warmer and drier spring weather than normal, we can probably expect snow to disappear pretty quickly once it does finally warm up.

My point is... look around, its pretty barren in a lot of places on the mountain and we are at the point in the year when we normally have the deepest snowpack. Just check out these two pics... the first one taken in 2017, the last one taken this year from just about the same spot on the Zephyr traverse on about the same day. Yes 2017 was a monster but hey, it is almost barren under that same sign now. The upshot, ski while you can because a long and mostly hot summer is just around the corner! 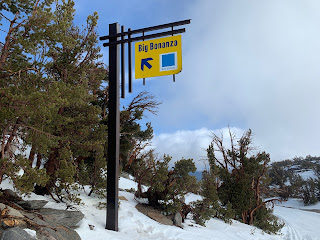 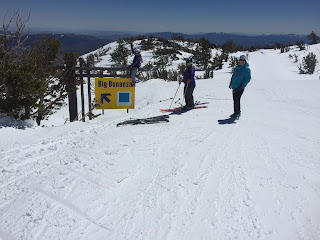