This title for a trifecta of reasons: 1) the last 4 "storms" if you can call them that have been accompanied by fierce winds that have stripped some slopes, loaded others or done both to the same slope changing every square foot; 2) the West side of Tahoe has definitely benefitted from these storms while those of us on the Sierra front have gotten a small percentage of the West side dumps due to the shadowing effect of the Sierras and the storms direction; and finally; 3) if one could stay up on wind direction and deposition it could work to one's advantage settling powder much deeper on some aspects and at certain elevations than others.

Although its just been a few inches at a time, everything helps and had the last two weeks been 55 degrees Slide Bowl would be looking a lot different right now. The colder temps and meager snow amounts at least means we were not losing any. The lines have also been shortened thankfully with two doubles and 2 singles being loaded so the waiting had been much better, esp on weekdays. Besides, the windy cold schlocky weather has further shortened the long lines and keeps us smiling when the sun does choose to reveal itself. In any event I hope you have had some fun out there regardless. I know I have. 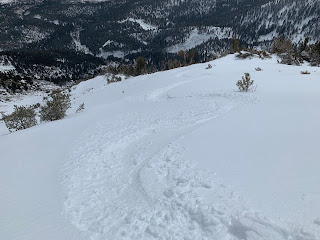