Raymond Joseph is my hero. At nearly 100 years old he is not only skiing, but skiing well! I had a chance to take a few runs with him last week and let me tell you, this guy is a character. With a memory as clear as spring water he related how he first strapped skis on in 1975 on a home made ski run in Alaska. Its been downhill ever since.

A pipeline engineer by trade, Raymond travelled the world working on dozens of major construction projects and everywhere he went, he managed to make his way to the nearest slopes... even when they were several countries away. He has skied in many different countries all over the world but when retirement was looming Ray and his wife chose Nevada for its wide open spaces. However, Raymond didn't push the "Easy Button" even in retirement.

Instead he bought 40 acres in Palomino Valley and began building a ranch from scratch. Finally installing a windmill for water after a couple of years, Raymond and his wife were pretty happy after only being able to bathe in the creek. Off the grid the first years the retirees ingeniously installed a generator/battery/inverter system for energy. Surprised he didn't build an oil pipeline straight to his ranch? Me too. I wouldn't put anything past this character.

Again not pushing the "Easy Button" Ray hand dug the foundation for his home with a bum shoulder and burned sage to soften the frozen ground as much as he could. In the late 80's Raymond loaded a chair with Al Mundt who told him all about the Senior Ski Program. Ray joined the program and never looked back and has been attending sessions whenever the opportunity arose ever since. Both WWII veterans in the European theater, the two became great friends and ski buddies. Ray also made friends with the infamous Rusty Crook who gave him enough tips that Raymond (who rarely passes up a challenge) ventured into and conquered, The Chutes in 2011 by skiing Miller Time top to bottom (see photo).

Ray drives the 80 minutes from the ranch to Rose three or more times a week to feed his need for speed. He and his wife Janet also fish and hunt and generally just enjoy being outside together. How does Ray stay so fit at 96 you ask? Ray hand splits all the wood to heat his ranch three times a week. There is no gasoline splitter involved, just a 10 pound double jack sledge hammer and heavy steel wedges that he sinks deeper and deeper into the wood until the round gives up its integrity to brute force. I asked him how many wedges he had to use on the worst knotty piece of wood and he responded quickly "Six". Most folks would quit on that round after sinking 4 wedges. Sinking five wedges would give most 70 year olds a heart attack. Loading the wood into his custom designed fireplace makes Ray smile, he said it first warms him when he splits it up, and again when he burns it. "Two for the price of one" he chuckles.

After riding up the NW chair with Raymond and skiing a few runs with him it struck me that my own father was in the Navy in WWII and had my Dad not checked out years ago they would be roughly the same age and would have a lot in common. My Dad would have appreciated Raymond for the same reasons I do. He is a doer. He doesn't back down in a challenge and enjoys every moment of it. He is the best kind of American hero, humble, resilient, strong as an ox, but one of the nicest guys you would ever expect to meet.

Mary Weneta, co-owner of Bobo's Ski and Board has made Ray a sponsored skier and as such will outfit him with whatever he needs... for life. He looked like a kid at Christmas when he walked out with new skis, boots and poles and other gear a couple weeks ago. Perfect timing too, its Raymond's birthday on March 23rd so wish him well if you see him on the hill... if you can catch him. Who knows, maybe Mt. Rose will really make his birthday a happy one by offering him a lifetime pass as a birthday present... he certainly deserve it! Miracles can happen and Raymond Joseph is certain proof of that. 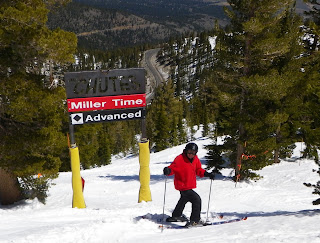