Pulled into the Slide Mountain parking lot Sunday morning at 8:35 with standard expectations of 300 cars ahead of me... the way its been most of the season but, to my surprise... the first row wasn't even filled. Less than a dozen cars and many of those were employees. My wife and I could'd believe it. By the time we got our gear on and were poling into the gates I looked up and still... no skiers. Were they open? Was there a wind hold? Nope, no signs as we pulled right through the entrance and onto the chair where I heard... "Public, Chair 48". Checked on the chair number over my head. Yep, that was us. Now a couple more peeps were coming through the gates as I looked back. 8:40 and we were the first chair... on a weekend? THAT hasn't happened in a long time. Given the fact that the off-piste was a frozen wasteland of frozen vegetables and the wind forecast was for single digits and strong East winds... yeah, OK, thats gunna scare some folks off... but all of them?

Silver and Bonanza were groomed meticulously, as good as they can make it with only inches between the tiller and gravel, brush and rocks but I gotta say, cruising down Bonanza on a weekend, with no one else in sight brought me back to twenty or more years ago. It just doesn't happen that often anymore. The trifecta of cold, wind and low tide drought conditions did its job. We had the resort to ourselves for an hour and a half and enjoyed every minute of it. I would take that over a crowded bluebird any day of the week and twice on Sundays. Relaxed, carefree and fully exercised we returned back to the car by 10:30 super stoked we had come up to ski like the "olden days". 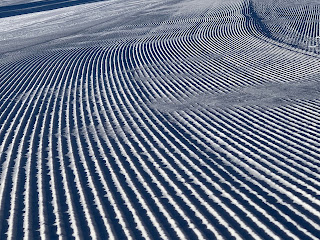