The most intense storm since the storm cycle of 2017 is poised to hit the Sierra beginning tonight. Two warnings point to a biggee: 1) a Winter Storm Warning has been issued for the Northern Sacramento Valley including Chico, Red Bluff and Redding which is extremely rare, and: 2) A Blizzard Warning has been issued for the Sierras beginning tonight and running through Friday.

This will create extreme avalanche potential on all slopes. North and East slopes in particular have a dangerous temperature gradient snow layer on the ground level which increases the potential for large destructive avalanches as the slide may break all the way to the ground taking all the new snow with it. Secondly, the winds are forecast to be heinous which will load leeward slopes more than others in such a short time that they will not have much time to stabilize, particularly given the cold temps associated with this storm.

Extreme caution is advised to all backcountry users during the rest of this week and into the beginning of the next. The Sierra and Carson Ranges are forecast to receive 48" to 72" out of this storm alone and possibly much more. Unbelievably the Mammoth high country is forecasted to receive close to 30 feet of snow in the next ten days.

I know we are all starving for powder... just make sure it doesn't get stuffed (literally) down your throat. 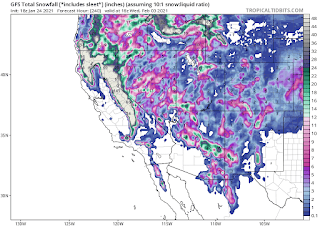