On 3/25/20 Tyler Dewitt and Ean Hannibal of Vail, Colorado ascended a slope on the West side of the Eisenhower Tunnel on I-70 thinking they would enjoy a pow run adjacent and uphill of the interstate and just above the tunnel entrance. What the two snowboarders got instead is criminal charges for reckless endangerment. Criminal penalties may include jail time and the paying of $168,000 in restitution to the powers that be.

You see, Dewitt and Hannibal attempted to descent a cross-loaded avalanche slope that had been loaded by the wind. The small slide they started then loaded a larger slope below them resulting in a large avalanche that buried the Loop Road above the tunnel and destroyed highway infrastructure.

Any serious skier or snowboarder is going to have their take on this from the onset. My question is: where does responsibility lie? As a big fan of BC skiing I really want to side with the two boarders but on the other hand, they did choose to ski right above a busy interstate so there does seem to be some culpability there. If we choose to ski somewhere that might result in damage, injury and death due to whatever is below us, are we not responsible, or at least, somewhat responsible for the damage to those below?

If, for example, you jumped into Barney's slide path between Sky Tavern and Mt. Rose and triggered a slide that buried cars below or caused other damage or injury... should you be liable for making the choice to ski that slope at that time above a highway? I know what my answer would be... what is yours? 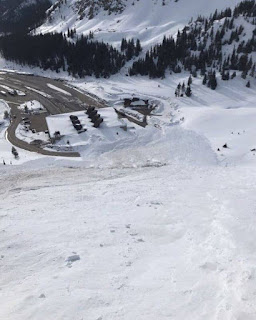