March 11, 2020
I sat down with John Hegstrom last week and he relayed the story of Slide Mountain Wax. Like most of us John was just getting tired of paying lots of cash for wax from Europe and elsewhere. Thats when the idea hit, "Why not do some research and make my own wax" he thought... and he did. But it wasn't as easy as one might think. A lot of chemistry lessons and research was involved. Like Edison and the light bulb John was been experimenting with ski wax for years now learning how to mix special ingredients in order to formulate an environmentally friendly hydrocarbon based wax that also delivers real world performance. After much work, he has managed to create a wax that works.

One of John's testers is First Chair Doug (in the yellow jacket) who we've all had blaze past us on first run. At first we thought he was just really strong but... it turns out, its mostly the wax (sorry Doug) Doug has been one of John's testers and it shows... Doug leaves us in the dust while running on Slide Mountain Wax.

Slide Mountain Wax comes packaged in environmentally friendly paper wrappers in four varieties, Yellow, Red, Blue and Green. John reports that Red works a great majority of the time in the Sierras but sometimes special temps call for special wax. It would be wise to buy at least the Yellow to Blue spectrum if you want to match the wax to the temps we get.

Slide Mountain Wax is as local as you can get. It is formulated and cast in Reno and tested on Slide Mountain, thus the name! And just like the wax, John Hegstrom is a high performer as well in terms of his friendly and kindly manner, if you see him on the lift with a wax sticker taped on his ski, ask him what he is running on that day and, if you're lucky, you just might get a free sample. I have been lucky both last year and this and I can tell you first hand, this wax rocks! 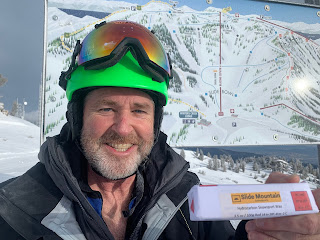