Its winter again... and the Sharks Teeth are waiting 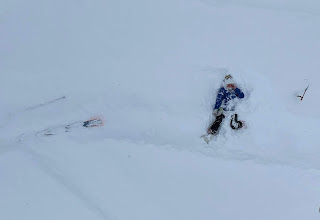 Thanks to over a foot of new snow it looks like winter again at Mt. Rose! Seems like every time they plan their Beer Garden Party it snows hard... they should have planned it halfway through December and every weekend thereafter...

Sun is shining and snow is sparkling for the last couple of days. Sunrise was groomed for the first time in weeks yesterday and there was barely a rock to be seen although lots of p-tex did get lost to granitic sharks teeth just under the surface. Groomed surface was interesting yesterday and I would say, too soft as a hard edge would grind you down into the lower substrate and you would catch an edge. There were many high speed falls yesterday from those mechanics.

Forecast looks good all week although the warming weather will not be good for the snow surface. My advice, same as always: Get out while you can!