Worst Ski Movie of the Year Goes to: Downhill

February 14, 2020
Just suffered through waaaaay too many minutes of one of the worst films of the century that includes Will Ferrel, The Alps and plenty of ski scenes. The photo from the movie marketing folks say it all. They are definitely watching their own movie in this picture. Its hard to go wrong with skiing in the Alps and comedy icon Will Ferrel but this movie manages to go wrong in the worst of ways.

Was finally getting my wife out on the town for V-Day after surgery three weeks ago and BAM. Solid looser flick that was as drab as it was depressing. Basically cowardly Will Ferrel is essentially neutered and stupid in this flick and his bitchy wife played by Julia Louise-Dreyfuss further castrates him publicly for an hour or so. Their two kids are personality free entitled droids who add nothing to the film.  The premise of a ski vacation gone bad as a comedy is a good one but the arrow in this case does not only miss the bullseye but never even leaves the bow, in fact the bow is never strung. The limp arrow just drops its arrowhead straight to the ground and then droops in despair.

In one of the scenes the entire family has a chance to go Heli-Skiing in Austria on a pile of new pow but no, they don't go because one of the kids are not playing nice with one another one can't find his glove. That was enough for me right then and there.

Even Will Ferrel can't rescue this stinker. Its like the turd that just won't flush circling around the bowl over and over and over... When the credits finally do roll its to a mixture of "Oh Thank God its over" with "Thats it. I paid for THIS".  There is only one reason to see this movie. If you are having relationship trouble and want to hasten a break-up, take your significant other and then tell her or hi that you absolutely loved it. Next thing y'know. You'll be single. Otherwise, all others stay away... Dud men tell no tales. As Ace Venture would say at the theater door... "DO NOT GO IN THERE!"

PS    This is my first movie review as I wanted to save other skiers from the same fate I experienced.
Will Ferrel was not laughing about this movie. Neither will you. 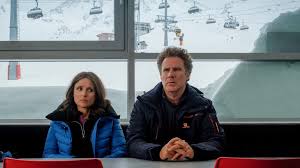