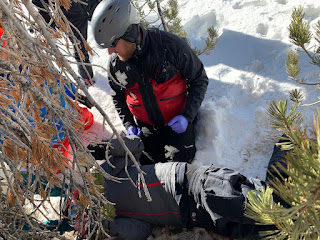 Yesterday Turnin Tim, (Slide Ski Patrol from '63-'66) hit a small frozen-in boulder at the second erosion ditch on the right side of Bonanza on his first run down in the morning and slid approximately a hundred yards plus at a high rate of speed down firm snow until being abruptly stopped by a tree 25 feet or so off the trail. At first it was difficult to find him wrapped around the tree in a well so far off the trail. Patrol was notified and showed up promptly. After an initial full body assessment the patroller directed volunteer assistance with the help of another patroller and Tim was carefully loaded onto a backboard and into the toboggan. At every juncture patient care was professional and attentive.

Down in the patrol room an IV was started and his badly broken leg immobilized and boot removed. A painkiller was administered as his pain level was a 9/10. The FD ambulance driver seemed to know every pothole in the parking lot and slowly wove his way through carefully in order to avoid any bumps on Tim's fractured leg. FD guys were awesome. Once in the hospital Tim was taken to one of the Trauma Bays where a half dozen or so medical professionals began x-rays and other general care as the patient was swapped over to Renown. Due to the blunt force trauma involved a full CT scan was ordered and luckily showed no internal damage. Surgery was immediately scheduled as his leg below the knee was shaped like the letter "Z" in order to temporarily stabilize it until another operation could install hardware for the badly fractured bones later in the week.

He is currently residing in the ICU until his next surgery. His recovery won't be easy and he is out for the season. Please contact me if you are a friend of Tim's and would like to visit him. He could definitely use the company.

In terms of the big question: "Why does this keep happening to Tim?" (This is serious ski accident number 4.) In discussion with others and after giving the matter some serious thought I have some theories that might be helpful for others. Again, they are just theories. I think Tim is stubborn and committed to skiing certain lines on the mountain no matter the condition (and who could say we wouldn't be doing the same thing after skiing Slide for over 60 years). When conditions were like they were yesterday this tendency can result in disaster. As Darwin said: "Adapt of Die." For example, last time he skied that line there was no boulder there. He wasn't aware that a lot of snow got moved over the busy weekend and that rocks and gravel were uncovered on both sides of Bonanza at the erosion ditches in places. The lesson for all of us here is:

1)   Take your first run in the morning down a new slope with caution, things may have changed after your last ski on it;
2)   If you can't see over something or you have poor visibility in front of you, slow it WAAAAAY down until you CAN see;
3)   Just because any given run is groomed don't assume there are no rocks or bare ground, we are at 50% or less for our snowpack on most runs and the ground may be exposed in high traffic areas. The groomers are doing the best they can under very minimal and difficult snow conditions;
4)   Plan on the worst that first run and then on your second run, open her up and have some fun;
5)   Adjust for current snow conditions. Just because it was soft yesterday doesn't mean its not an ice rink today, and lastly;
6)   Know where your Red Line is and stay on the healthy side of it. Ski in control and stay out of the orange toboggans. A toboggan ride is a lot of trouble, especially for you.

After spending much of the day with Tim in the ambulance and in the hospital I can tell you from first hand experience. It is well worth heeding the advice above.

My takeaway from yesterday... live to ski tomorrow! Hopefully Tim's Tumble can, at the very least, be a good object lesson for all of us.  Thanks to all you in the Rose Tribe who helped get Turnin Tim safety out from the tree well: Nick, Dave, Cici, Billy, Rick and Kristen and others.

As always we await his return next season as he becomes more Machine, then Man. 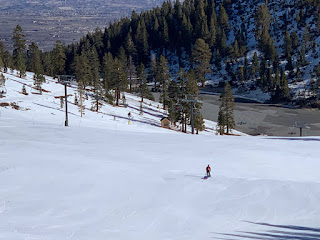 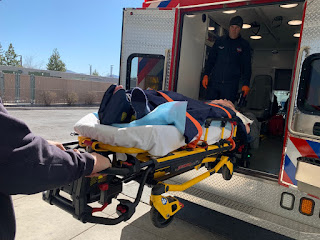 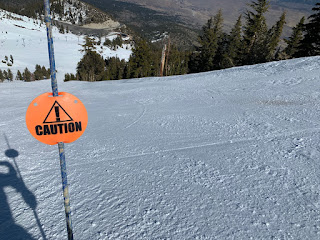 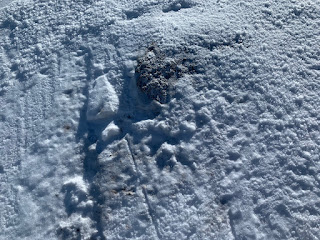 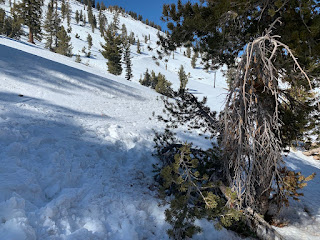