February 10, 2020
Conditions we skiers dream about... temperature in the teens on a windless evening in February just downhill from McBride Springs... I had left the Sierra Club Shasta Hut at five that morning for a winter summit ski and had managed to just keep going on an epic downhill from the summit to McBride for a 7000 foot plus vertical run and now... well, it looked like I'de be walking miles back by highway or skinning to the hut which was a seriously long way up through new powder. Traffic was non-existent on the dead end Everett Memorial Highway and I was feeling tired enough that it might be my own memorial highway soon enough if I didn't get moving. So, I shouldered my skis and in the late afternoon light began the upward trek on the pavement in my ski boots when a little pick-up came around the corner and slowed when I stuck my thumb out.

I didn't recognize Dave McCoy at first but when he said he was coming from Mammoth to check into building a ski resort on Shasta I knew just who the man was who had introduced himself simply as "Dave'.  He asked me what the heck I was doing out alone so far down the mountain on marginally thin snow and I gave him a snapshot of knee deep powder on the summit in stable conditions and my solo seven grand ski down into Hidden Valley topping it off with fact that it was one of the best skis of my life. When he asked me why I didn't stop and traverse over to the cabin when I had the chance. I answered that the skis just seemed to have a mind of their own in those old growth Shasta Red Firs and I kept on turning until I ran out of snow.  He smiled widely with a sparkle in his eyes and said. "Yep, it happens."  It felt like he then fired off a hundred questions about skiing the mountain, summiting, the complexity of the terrain, snow safety, avalanches I had witnessed etc. At the time I had summited dozens of times as a part-time Mountain Guide and had guided ski groups in and around Avalanche Gulch many times.

Before I knew it we had passed Bunny Flats where I should have began my couple mile ski back uphill to the hut and were headed up to the dead end where the old Mt. Shasta Ski Bowl had operated before a large avalanche took out the lift.  Dave got out and stared upward.  In his vision he saw lifts, a lodge and new challenges on a new mountain. He didn't say anything for sometime as the now dying winter sun cast an orange glow on the sawtooth Sergeants Ridge above us. Finally he said "We can ski this. This could be skied." I didn't respond for a minute as we both were enchanted by the beauty of the quiet winter sunset on a great mountain and then I said... "yeah, I just did."

Dave smiled and nodded as we both wordlessly enjoyed the last few minutes of a dramatic winter sunset. A chill and wind sent us back to his old pick-up and we headed back to Bunny Flats in the gathering darkness. The mercury had dropped considerably and Dave offered my a couple pieces of cold pizza as he pulled over to drop me off in the dying light. As I skinned up I sensed a part of him wanted to come with me into the mountains on skis that night. But then, thats what Dave probably always wanted... to be on skis and headed up into the mountains. I turned and waved as he stood watching me top the ridge above his truck. I gave a quick wave that was graciously returned as he shouted out "Good Luck" and turned to go. We both went our separate ways but as I learned a little more about his life on epic spring trips to Mammoth I never forgot what a humble and nice guy I met that evening on Mt. Shasta.  Simple, humble and kind.  Dave knew what he loved and that love of skiing and the mountains was his essence.

In recounting my time with Dave McCoy there is little doubt that after he left this reality on Saturday in Bishop dying in his sleep, he strapped on some skis in the next reality and is headed back into the mountains forever. Thanks Dave for living your life in love with the right stuff and for sharing your love of the mountains with the world. May you ski in peace. 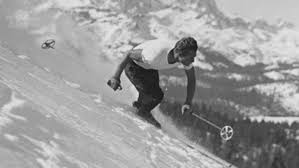