Spring Has Sprung (only its mid-February)

February 15, 2020
A Springy Saturday with cold beer. What could be better you ask? Well, a little more snow would be the answer. Chutes were closed today although they were open last Thursday before 10am (and as I pondered before heading in) were harder than a rock Thursday morn. The good (bad) news is you wouldn't be able to tell the difference too much between the rock and snow surface. Still, I'm always glad to see them open. I like options and given enough time to poke around in there carefully, can often find something fun to ski.

While I was riding up Zephyr I watched a border fall and then slide two thirds of the way down Bonanza late in the pm and thought to myself, "Yeah, based on what I just witnessed, its probably a good idea to have The Chutes closed during the holidays. Will they reopen next week? Difficult to say. I would hope when Reno hits 65 we could have some more fun in them when they soften up a bit. But thats only if the snow lasts and it certainly seems to be going fast. If they don't... glad I got in there the last day. No matter how crappy it was. After all it is one of the best vertical playground's in the Sierra.

The other thing to remember of course is that its only mid-Feb and we could still get dumped on in March and April, although chances do drop a little every day we edge toward Spring. Speaking of spring...

It was warm enough today that much of the mountain did soften and it made for some great skiing. And the holiday crowd you ask? Non-existent. The slopes were virtually empty at times today. The shot below was taken from the chair looking toward Bonanza at around 2:00 pm. As you can see, empty as a Christmas Store in August.

How good was it. The last photo says it all. Untracked corn could be found but you had to look due South. 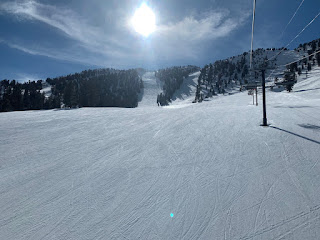 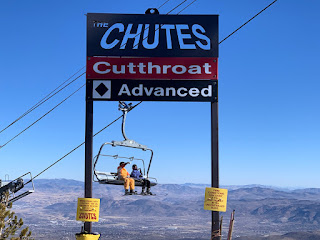 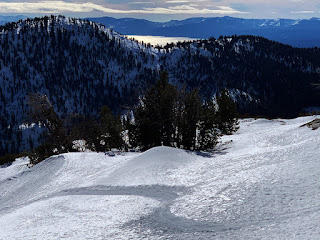