Living in a beautiful place...

February 02, 2020
You gotta admit, we live in a pretty amazing place with one of the world's most iconic mountain lakes as the center jewel in the Sierra Nevada's Range of Light. OK, sure, the snow ain't too great right now but hey, the positive side is it won't stay this way for too long most likely. The lake shot was made yesterday showcasing the persistent fog layer over the lake the last couple of days and a delicious sunset over the crest with some high orange clouds.

Skiing on Super Bowl Sunday is usually good... but not so much today... the Western White Pine cones were actually being blown downhill faster than I could ski sometimes as tornado type winds raggedly attacked the Slide Side runs every so often. The snow surface itself was pretty good on-piste but equally ghastly off-piste with yesterdays ski tracks of joy morphing into a nightmare of frozen vegetables and deep railroad track punctuated by frozen snow rocks and rat bodies. Vis was also a problem at times. That being said, I still had a good morning as I'll take a few ski runs over a sharp stick in the eye any time. Its all about relativity right? Skiing, even on a bad day is still better than thousands of other things so... was it worth going up. Decidedly yes. It always is... as long as that lift is spinning. 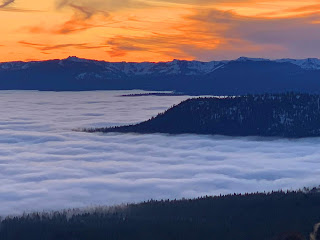