February 29, 2020
It was one of those days at Rose when few drive up the hill because they are pretty sure the lifts will be blown out. I had promised myself some ski exercise so headed on up into the SW wind. Pulling into the Slide lot the lift was moving first thing which made me smile as areas of blowing snow blew across the parking lot.

Headed up and found myself the only one on Bruces, then the only one on Waterfall and the only one on Bullwhip and so it went. Fresh cord still to be had after 10:00 am on a Saturday morning. Just then  a text from Alpine said their parking lot was full and the shuttle was running from the highway. I smiled... as I chased my lone shadow down immaculate groomed slopes without so much as one the skier and thought to myself... this is why I LOVE Mt. Rose. I'll take the wind over the hordes any day of the week and twice on Sundays. Five or six runs later I loaded with tourists who rocketed the bar down before my butt hit the chair. They were amped and anxious. As our chair swung wildly up by NW Tower 10 the white knuckled Bay Area tourists hanging on for dear life yelled into the wind... "Is is always like this?" I of course responded with all of you in mind "Seven days a week and twice on Sundays. But I hear Northstar is pretty calm."

As NW closed due to wind hold and I skied over to load on out of here for work the Zephyr chair also went down and as I drove out of the lot a half dozen cars were heading up to ski... sometimes your timing is just right.

Pictured here is Billy the Kid waxing poetic with his signature mustache and skis while throwing some snow on NW this morning. Man, that guy can ski (and I from what I hear, rob banks too). 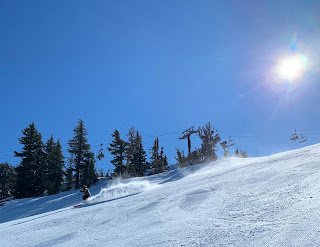