A Pristine Day on a White Rose

February 13, 2020
Midweek bluebird and Zephyr is freshly groomed... like a horny bachelor a bottle of champagne into the party I was drawn to the young bridesmaid, nigh magnetized I say, even though I knew the skate on the Upper Traverse first thing in the morning would be winding on my old body. But drawn to the virgin folds of her slope skate I did and when I arrived at the end of the cat track launched off onto perfectly laid down cord that not a ski had touched. Washoe Lake twinkled windlessly below as time slowed down while airborne and almost seemed to stop as I realized the perfection of the moment.

Sun, snow and untouched corduroy combined to form the perfect trifecta as I laid down perfect turn after perfect turn in one cat width that seemed made just for me. As I rounded the bend between two Grandfather Western White Pines and looked back uphill. Still no one. Signature tracks on a signature day. I let'er rip down to the flats below Bruce's smiling like an idiot. Yep. I had just scored. And I didn't even need champagne. 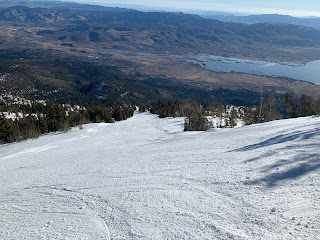 Took a pic an hour later and still pretty empty