November 27, 2019
When you just walked across ground at 2.5 mph that you are now dancing over in unbelievably light pow... its feels like a miracle... and it is. Trillions of crystals have to find an impurity in the atmosphere... a piece of dust, some ash and thus begins the crystallization process that ends in a the magic of a snowflake and a trillion brothers and sisters that fall from the sky like there is no tomorrow. Feel impure sometimes... you might be the heart of a miracle (but probably you just need some soap and a shower.) In terms of a real miracle... just check out the photo with this post... THAT is the miracle. That we are alive in a time when we can ride a conveyance to the top of a mountain and then dance down on one board or two in such a way that it feels like flying. That is it.

Rose opened Aida's, Lower Ramsey and Jetta today expanding the skiable terrain many times over and the first three runs were pretty darn good. The Rose Patrol Director gave the first chair folks a nice heads up on what was open and that the face runs would most likely NOT open today as ropes and signs needed to go up. I expect most will open tomorrow. He also warned folks about the water bars although, once again... you just can't stop stupid. Watched a youngin doing about 45 down Lower Ramsey double eject and fly at a minimum 35 feet or so before landing and tumbling another 20. Did he learn his lesson? you ask. Hell no, 30 minutes later I watched the same dude pull ahead of me airborne.

I don't know, maybe, slow it down some when there is absolutely no base and you are skiing like a demon... just a thought. Just glad I wasn't in Stupid's trajectory. If the Face Runs do open tomorrow remember, those water bars are deep and steeply banked on the downhill side. I don't bounce like I used to so I'll be the slow poke taking them at an angle.

In any event skiing was awesome although the "Winter Storm Warning" we are now under and which expires at 4:00 pm tomorrow seems a little ridiculous as the skies have cleared for many hours. Maybe there is another wave coming through since the barometric pressure is so dang low... I hope so. Happy thanksgiving folks and may each turn bring you as much joy as it does me. Today I found the stoke. 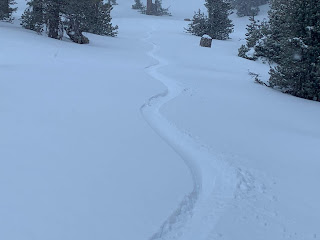