Mayuary... what the heck is going on? 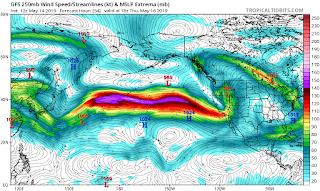 Daniel Swain of Weather West said it best when he asked "What the heck is going on?" Although late season storms are fairly common in late May and early June in the Sierra's and the Carson Range the duration and intensity of our current storm cycle is quite unusual. If you jumped the gun and planted anything outdoors in the Truckee Meadows you know what I mean. Late tonight the NWS is calling for the snow level to reach down to possibly 5000 feet. Oh lord. I'm kinda done with the cold and wind. Don't get me wrong, I'm not saying I still believe in the Doug Coombs quote "There is no such thing as too much snow, but, jeez, there does seem to be too much cold and wind and clouds for May, at least to my liking. I kinda was hoping for some spring skiing... y'know, sun and blue skies and soft consistent snow till noon and all that. Not gunna happen, not for while anyway.

Remember when we would get blue skies with storms wedged in between for a day or two instead of weeks of cloudy weather? Well, I do. That was one of the great things about living in the Sierra. Big storms sandwiched by Blue Skies... and enough snow to drool over for sure. In any event, the forecast looks quite austere if you are after some early summer spring skiing anywhere. The forecast looks to be most cloudy with showers each successive day as an unusually strong for this time of year jet stream continues to push across the Pacific Ocean. Couple this with the numerous Lows spinning down from Alaska and you've got a storm conveyer belt with one storm lining up after another. Most forecasters are now conceding that Memorial Weekend will be a grey shit show for most outdoor events (good thing I'll be in Mammoth celebrating my son's 18th birthday, we may be in the hot springs more than on our skis...). Some forecasters are extending the Crap Show through the end of the month. There is some light at the end of the tunnel (literally) as June looks to warm up quickly to more heat than we really want. From the freezer into the fire... yep, thats Nevada folks! Below is the 10 day forecast for precipitation... as you can see we are in the bullseye. 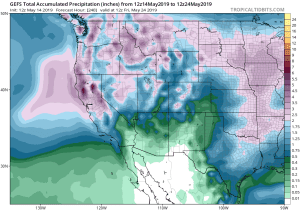