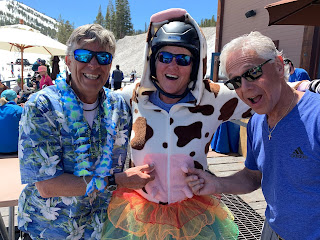 The pic above is NOT a part of the Me Too Movement... it's just udderly ridiculous.

Wow. There was more than a crowd for the renewal party. If anyone doubted that Rose could sell enough passes without joining EPIC or IKON, well, doubt no more. The Biggest Little City Ski Area is not only holding its own but growing in leaps and bounds... felt like a little too big yesterday waiting in the beer line. More taps on the deck would be a good addition for next year so we can keep "Rollin out the barrel." In any event, Master of Ceremony Charlie once again did a stellar job of making us laugh, poking some fun here and there and leaving some innuendo's that left many in stitches and a few a little "offended". A word to you offended folks, if the intention was to make you laugh and you took it seriously enough to get angry, you might try loosening up a bit. There was no ill will intended. Besides, you may not be taking skiing seriously enough. Its a sport that lets you fly, let go and embrace the fun factor! Speaking of fun factor, the Bikini Wolf and Udderly Ridiculous Cow and many other costumes were icing on the cake. Love that these guys decorate themselves for us. Hope the wild ones keep being wild on a mountain that truly celebrates diversity in a practical way.

After a few beers most folks headed to the parking lot. Others heard the chutes calling and they were rewarded. The Chutes yesterday afternoon were absolutely stellar. Although El Cap gate remained closed, Yellowjacket was open and through that door lay run after run of perfect corny goodness. Rather than rotten boot top crapola the chutes held soft on top, firm underneath snow that skied like a dream. It was so good that even old guys like me thought we actually could ski. Yeah, it was THAT good. Our first drop into Detonator off the ridge looked intimidating with big ass bumps and boarder ruts but as you sliced into your first turn and it felt like brakes and suspension on a 70's caddie, you realized that you could just roll through the ruts like a hot knife through butter. We couldn't get enough and we started thinking how many runs we might fit in before 3:30. Crowds: there was none, they had all returned to their vehicles leaving each run laid out below you beckoning for another set of tracks. It felt perfect, legit, wonderful. It felt right.

Finished the day with a slowmo Manzo run just enjoying the perfect day in reverie, the sky was blue, the valley clothed in the deep green of spring and the squirrels, bears and birds were awake and moving about with the warm weather. As I came around the corner in the final traverse and headed toward the car I had a peaceful easy feeling. Life is good.


PS   This blog is for entertainment purposes only. If I upset or offend in any of these posts know that it was not intentional. There is enough anger and animosity in the world at large without me adding to it. 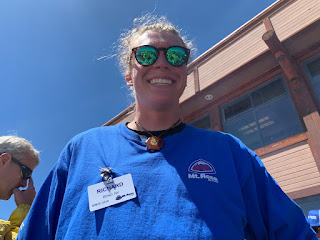 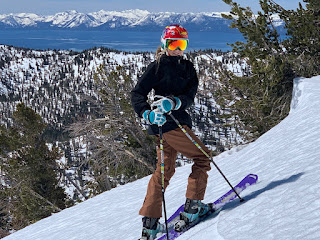 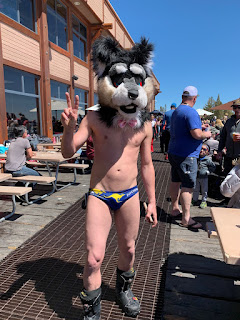 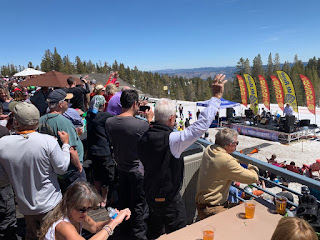 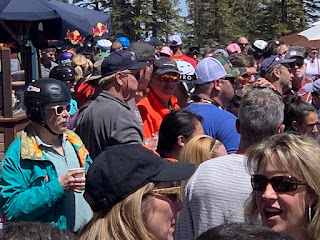 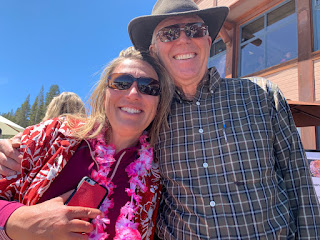 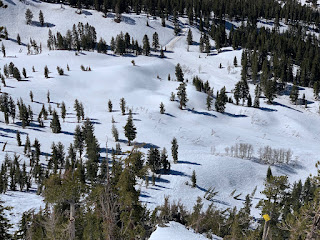