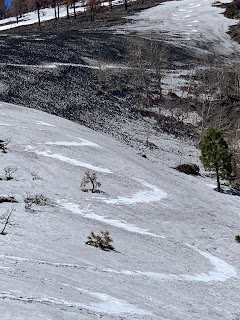 Your last runs are coming to a mountain near you. Hope you come on up, enjoy some righteous music and the end of the season Renewal Party get some of the last turns of the season in. Took one of my last runs down to lower elevations this week and had to connect the dots to make it happen... and on black snow to boot. The strong South winds last week blew ash and dirt making the snow black and mud cupped. Pretty ugly skiing for some of the turns, but then again, even ugly turns are better than none. The couple grand of nature's best corn above the ash and mud made it all worth it.

And thats skiing right, even when its bad its better than no skiing at all. At least thats the perspective I attempt to harbor whenever possible. Makes for more gratitude and less bitching about life in general for sure. I even had a reader complain about the way I spelled her name. Hard to believe, I know after I lauded her positivity mountain wide. I can't know everyone's spelling y'know. So I did a little research on this person's name and found, you guessed it, dozens of ways you could spell it but I'll just go a dozen here... and here they are: Cece, Seasea, Seesee, Ceci, Cici, Seesea, Sici, Cisi, Cisi, Cice, Ceacea and finally the simplest of all, CC.